We’re excited to be kicking off our special 25th anniversary year with this joint event with Toronto Reel Asian International Film Festival. It was screened at VAFF On Demand – Feb. 5, 2021 6:00 pm (PST) – Feb. 6, 2021 6:00 pm (PST). It’s only accessible by viewers anywhere in CANADA.

We’re thrilled to be presenting the advance screening of Minari in Canada. The film premiered at Sundance in January 2020, where it won the Grand Jury Prize & U.S. Dramatic Audience Award and has continued to garner critical and industry-wide acclaim.

The film will be available for rent on digital and demand February 26th, 2021 across Canada. Learn more at https://www.elevationpictures.com/ 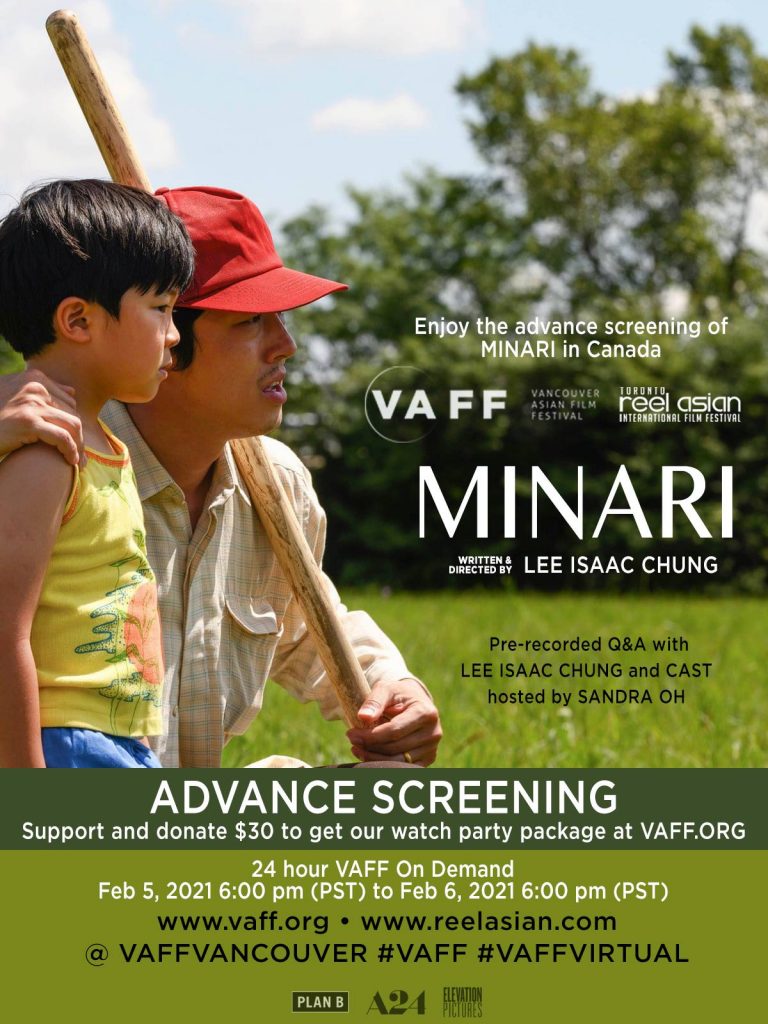 A landmark film in the history of Asian representation in Canadian cinema, Double Happiness is celebrated as one of the few North American films of the 1990s to have a primarily Asian cast. Earning seven Genie Award nominations and two wins, Sandra Oh’s breakthrough performance in the film won her a Genie Award for Best Performance by an Actress in a Leading Role. As we celebrate the 25th anniversary of Double Happiness, VAFF is proud to host a special screening and post-screening Q&A with the person who created this iconic film –  writer and director Mina Shum.

During the year 2019,  with generous support of  Richard K. Wong,  we dedicated to creating more opportunities to share Asian Canadian stories through film and launched 100 Stories Challenge to encourage inter-generational dialogue and connections. We hope that by the end of this Challenge we will have collected more than 100 stories documenting the legacy of Asians in Canada.

we hosted the 100 Stories Challenge Final Showdown during the 23rd Annual Vancouver Asian Film Festival on November 8, 2019. We celebrated this inaugural competition which created to uncover the extraordinary and unique lives of regular Asians living in Canada. The top 3 finalists of the 100 Stories Challenge made their pitch to decide who was the best storyteller and most deserving of the grand prize.

Let out your wild side and claim your seat at VAFF’s Dim Sum After Dark. The Vancouver Asian Film Festival serves up an edgy Asian film paired with a selection of dim sum appetizers on May 31st, 2019 at Pink Pearl Chinese Seafood Restaurant. On our menu this time: Director Ang Lee’s Lust, Caution (2007).

National Canadian Film Day is an annual event in mid April that held in communities all across the country to celebrate Canada through Canadian film. It’s a day to sit back in your seat, take off your toque, and have some FUN! We had been partnering with REEL CANADA and co-presenters explorASIAN from 2016 – 2018.

During the 22nd year of VAFF on April 18, 2018 NCFD event, we were partnering with REEL CANADA and co-presenters explorASIAN, partners H. R. MacMillan Space Centre, and the Museum of Vancouver to present a spring screening of director Ashley Duong’s A Time to Swim.

During the 21st year of VAFF on April 19, 2017 NCFD event, we were partnering with REEL CANADA and co-presenters explorASIAN, partners Vancouver Public Library and Hapa-palooza to present a spring screening of “Mixed Match” by BC filmmaker Jeff Chiba Stearns.

During the 20th year of VAFF on April 20, 2016 NCFD event, we were partnering with REEL CANADA and co-presenters explorASIAN, partner CBC Vancouver to present a spring screening of director Ruba Nadda’s SABAH.

In celebration of Canada 150 during the Summer of 2017, Vancouver Asian Film Festival (VAFF) launched the Canada 150 / China Scriptwriting Competition in partnership with China’s CNH Management Ltd., to better reflect Canada’s diversity across the country’s feature filmmaking landscape. The winner will receive a cash prize of CAD$10,000 after signing a contract assigning CNH the right to own and develop the winning script, for production and distribution.

We launched Youthflix Program during the 20th annual Vancouver Asian Film
festival. The purpose is to foster youth filmmakers (8 – 24 years old) and offer
them both an educational experience as well as an opportunity to showcase their
work to audiences and meet potential industry networks.

Red Packet Challenge (RPC) is a fun and exciting contest where anyone with a video camera or smart phone can get creative and show off their storytelling skills in making their micro-films from 6 second to 3 minutes.

Highlight of the UltraShorts

Mind Your Bid-Ness (MYB) is a one-of-a-kind, massively hot auction party, presented by the Vancouver Asian Film Festival as one of its annual fundraising events

Commercials have no criteria but to be 30 seconds long and to fit with the theme “What’s Your CombinAsian?”.