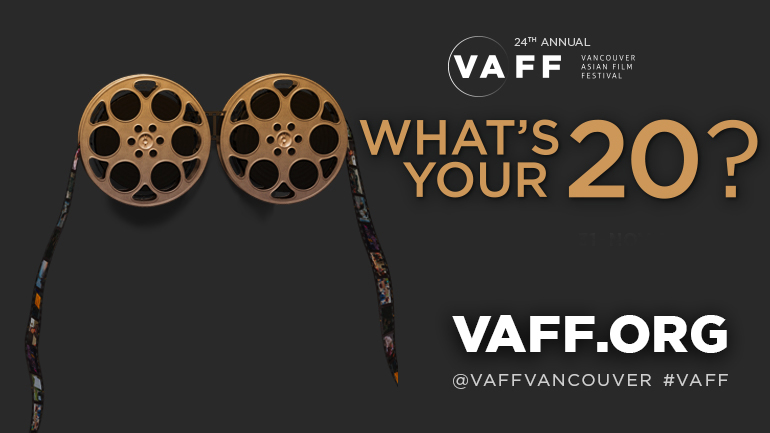 Thank you for joining our first virtual festival

After 9 exciting days of on-demand films, live panels, and special events, the 24th annual Vancouver Asian Film Festival has come to an end. Amidst the chaos of this year, we explored the theme “What’s your 20?” to reflect on where we were all at physically, intellectually and philosophically. After our 24th year we are thankful for what we have been able to achieve and cannot wait for that golden 25th year anniversary next year!
Before that, let’s take a look at this years’ highlights.

VAFF 2020 featured a diverse selection of 47 films of all genres, from comedy to horror, to drama and documentary. The films took us all around the world, in a time when we were holding on in our homes from Thailand to South Korea to right here in parts of Canada. We were proud to showcase to our audiences 5 world premiere films, and 12 North American premieres. In addition, over half of our films were Canadian!

Due to a large number of excellent short films, we were able to create 7 shorts programs, many of which were well received. Particularly popular were the Life & Death and Deep In Your Mind shorts programs. Feature films like Gyopo and The Donut King also generated buzz and were well-liked by audiences.

Although we were not able to host an in-theatre showing of our opening film, The Closet, we were able to hold a live virtual screening, followed by an exciting virtual Q&A with film director Kim Kwang-Bin. Our festival director, Lynne Lee, hosted the session in her Queen of the Dead costume, true to the spirit of Halloween! Through this intimate discussion, we listened to director Kim’s experiences working in the unique genre of horror alongside top Korean actors, as well as what it was like premiering a highly anticipated film at the beginning of the pandemic. We were grateful to be joined by valued guests for our live panels. We held 3 Industry Panels, providing insight into how to break into the film industry, and the resources available to aspiring filmmakers just starting out. Viewers especially liked panels on the secret to Becoming a DGC Director, the explorations of the Telefilm Talent to Watch Program and Introduction to the UBCP/ ACTRA Ultra Low Budget Program.

Of note also were the 2 Elimin8Hate panels held, speaking to the importance of authentic and meaningful Asian and minority representation in media. Both the discussions on “Elevating Underrepresented Voices in Film, Television and Media” and the “Model Minority Myth on Film” were a great success.
We were fortunate to have many of the films’ directors share filmmaker talks with us, whether it was live or pre-recorded. We are thankful for their time and the insights they shared with us about their films and filmmaking process. You can rewatch or catch up on all the panels and talks on our Youtube channel! We wrapped up the festival by crowning several films for the VAFF 2020 awards. From films selected by a panel of judges to the People’s Choice Awards voted by you, the viewers! The final winning films were:

To celebrate the award winners, the Best of VAFF extension was held for the first time after the official festivities wrapped up, making the winning films available for an additional watch period from Nov 13, 2020 to Nov 20, 2020. Thank you once again to the judges Mannu Sandhu, Stirling Bancroft, Winnie Hung, Jem Garrard, Ana De Lara, and Jacques Lalonde for your time and expertise in selecting the winning films. Thank you to everyone who tuned into this year’s #VAFFVIRTUAL.

Special thanks to our generous sponsors and community supporters:

Another special thanks to our volunteers, team members, industry supporters, media and vendor sponsors for making this event possible. And thank YOU for joining us for our very first virtual festival at home; though things looked different, our hearts and spirits were connected as one through the silver screen.