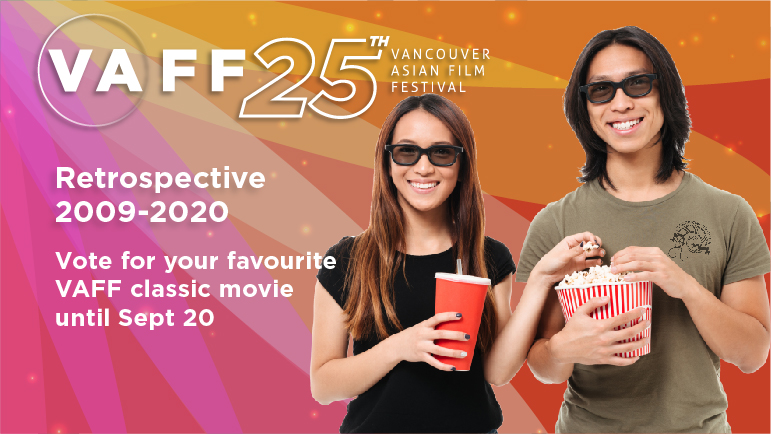 Vote for your favourite VAFF classic movie from 2009-2020

The winning movie will be streamed as part of a double feature special that will kick off the online portion of VAFF25 on Monday, November 8, 2021.

This September, we’re inviting you to choose one classic movie that was screened at VAFF between 2009 and 2020. And once again, all participants will be entered in a draw for a chance to win a free ticket to this year’s festival in November. The movie with the most votes will be streamed on Monday, November 8, 2021, as part of the opening of the online portion of the upcoming VAFF25. The 25th Vancouver Asian Film Festival takes place from November 4 to 14, 2021.

Here’s an overview of the classic films you can vote for: A 30-something career woman tries to find the balance between her demanding family and her perfect new boyfriend. Twilight’s Booboo Stewart plays a neglected teen trying to make it through each day after tragedy strikes. When John discovers his sister’s fiance is Jack, his childhood crush, passions ignite and his life spirals out of control… losing his job, his playboy reputation and his underwear, all while rushing to the altar to finally confess his love!

A young man spontaneously teleports and disappears at a young age. As he struggles to deal with his unique disorder, he finds himself alone and disoriented as he continues to try and find his way back home.

“Tele” was the winner of Best Canadian Short Award This feature documentary explores the origins and ubiquity of Chinese-American food through the story of an iconic sweet and spicy chicken dish. In 1986, a group of foreign born Korean teenagers attend a summer camp in South Korea. ​​A weary undercover cop must maintain his cover while trying to save the daughter of a notorious Triad Boss from becoming collateral damage in a sting operation gone wrong.

“Beyond Redemption” was the winner of the “People’s Choice Award” at VAFF19. All Our Father’s Relations, 2016, Canada

The story of the Grant siblings – Howard E. Grant, Helen Callbreath, Larry Grant and Gordon J. Grant – now in the twilight of their lives, and their connection to their mother’s First Nations (Musqueam) heritage and reconnecting to their father’s southern Chinese heritage.

“All Our Father’s Relations” was the winner of Best Canadian Feature Award at VAFF20.

Under Fire: Inside A Chinese Roasted Meats Shop In Vancouver, 2016, Canada

This documentary short brings you into the kitchen of an East Vancouver grocery with an unexpected menu item: roasted pig. Discover the secretive cooking methods and Chinatown’s historical struggles with this iconic dish against municipal, provincial, and federal legislation.

“Under Fire: Inside A Chinese Roasted Meats Shop In Vancouver” was the winner of Best Canadian Short Award. Two Korean-American brothers run a shoe store in L.A. county. Their friend, black eleven-year-old Kamilla, drops in and helps. On this day, the Rodney King verdict ignites the 1992 L.A. riots. “For Izzy” is a story about a queer photojournalist recovering from opioid addiction who befriends an autistic woman seeking to break out of her insular life, while their respective single parents find renewed hope in an unexpected romance.

“For Izzy” was the winner of Best Canadian Feature Film Award at VAFF22. Following the 10-year journey of a Chinese couple searching for the truth behind their son’s death in Canada, the film is a rare revelation of immigration, mental health and a Kafkaesque state bureaucracy at the heart of global migration. Set in 1996, in a majority-minority neighborhood, 16-year-old Pooja finds herself torn between her crush on a white boy, and her Brown and Black friends. Her pursuit takes a violent turn, making her quest for love, a question of self-love.

“White Elephant” was the winner of Best Canadian Feature Film Award at VAFF24.

The last day to take part in our retrospective film poll is September 20, so make sure you vote for your favourite VAFF classic movie by clicking here.

And don’t forget to check back after September 20 as we reveal the title of the most popular movie.