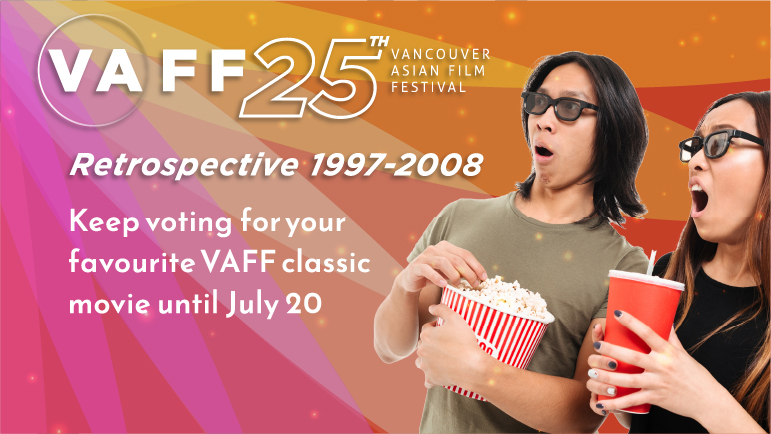 Vote for your favourite VAFF classic movie from 1997-2008

With the 25th edition of VAFF taking place from November 4 to 14, 2021, we kick off the festivities of our landmark anniversary with our first retrospective special. This July, we’re inviting you to choose one classic movie that was screened at VAFF between 1997 and 2008. What’s more, you will be entered in a draw for a chance to win a free ticket to this year’s festival in November. The movie with the most votes will be streamed for free at the end of July, so watch this space for more details.

This year’s festival is overseen by VAFF’s new Festival Director, Susan Hanson. Susan is a former Business Ed teacher who later became a Freelance Korean/English interpreter. In 2005, she pursued her passion for acting, which included stage, commercials, TV, and film. Susan’s stage debut was in 2018 as “Umma” in the award-wining stage performance of “Kim’s Convenience” at Chemainus Theater. As an active member of the entertainment industry, she has appeared on TV shows such as “The Man in the High Castle” and “Woke.” “We celebrate VAFF 25th year with the theme of Past, Present and Possibilities,” says Susan. “And what better way to acknowledge VAFF’s beginnings than to showcase films that were the cornerstone of VAFF during its earlier years! Come join us, as we kickstart our celebration with amazing retrospective films!”

Here’s an overview of the classic films you can vote for:

A married woman, who’s been getting seductive phone calls from a lesbian, and a man, who believes he might be a werewolf, are about to find out who they deep down really are.

“Shopping for Fangs” was screened on the opening night of the first ever VAFF in 1997. Three Asian men live in L.A. Isaac is a romantic coffee shop worker, who waits for the woman of his dreams, and loses his balance after meeting a femme fatale called Thaise. Slim is a Rastafarian smoking pot all the time, who is trying to elude a local mobster. Troy is an actor, who has to choose between his career and his girlfriend. Filmmaker Colleen Leung grew up in Cumberland, BC, a predominantly Presbyterian village on Vancouver Island. When she travelled to China as a student during the years of Chairman Mao, she uncovered a startling secret–an entire second family resided on the other side of the Pacific. The film follows Colleen on her search for answers about this hidden history, bringing her a new understanding of family and heritage.

“Letters From Home” was the first ever Canadian documentary feature at VAFF.

A lush, layered, homoerotic dance video inspired by the portrait series “The Ramboys: a bookless novel,” by Montreal photographer Evergon. In Cantonese and English.

“The Photographer’s Diary” was the first LGBTQ breakthrough content at VAFF. Thirteen-year-old Ernest Chin lives and works at a sleazy hourly-rate motel on a strip of desolate suburban bi-way. Misunderstood by his family and blindly careening into puberty, Ernest befriends Sam Kim, a self-destructive yet charismatic Korean man who has checked in. Sam teaches the fatherless boy all the rites of manhood. American animated film based on Ye Xian, a ninth-century Chinese variant of the fairy tale Cinderella, starring Tsai Chin, Randall Duk Kim, Ken Leung and An Nguyen. Written and directed by David Kaplan, the film is set in a massage parlor in modern-day New York’s Chinatown.

The last day to take part in our retrospective film poll is July 20, so make sure you vote for your favourite VAFF classic movie by clicking here.

And don’t forget to check back after the 20th as we reveal not only the title of the most popular movie and the winner of the free VAFF ticket, but also details on how to stream the winning movie for free at the end of July.