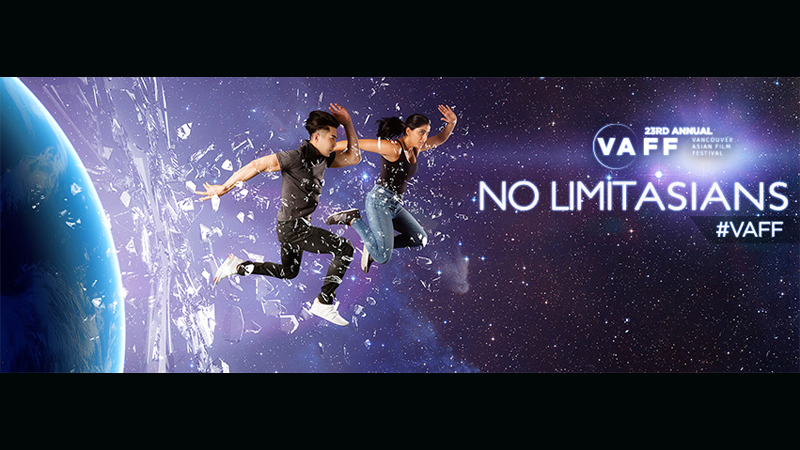 Vancouver, BC – September 11, 2019 – Last August 31st, the Vancouver Asian Film Festival (VAFF) held their 14th annual filmmaking competition, the Mighty Asian Filmmaking Marathon (MAMM) at the Vancouver Playhouse. The films were screened and the awards were given, as well as a big announcement from VAFF.

The unveiling of VAFF’s ambassadors and theme for this year happened just before the after-party. The ambassadors are none other than the talented Asian-Canadian actors Ludi Lin and Aliza Vellani. They were unveiled breaking boundaries in the poster artwork that fit appropriately with this year’s theme of NO LIMITASIANS.

Ludi Lin​ is a Chinese-Canadian actor who made his Hollywood film debut as Zack, the Black Ranger in Lionsgate​‘s Power Rangers​ (2017).  He also played Murk in DC’s blockbuster hit Aquaman​ (2018) and can currently be seen in the Netflix series ​Black Mirror​ (2019). In 2020, Lin has a number of projects opening, including the Netflix series Ghost Bride (2020) and Son Of The South produced by Spike Lee .  Named as one of Variety’s Asian Faces to watch for in 2018, it was recently announced that Lin will star as  Liu Kang in the upcoming ​Mortal Kombat​ (2021) reboot for Newline.

Lin was born along the southern coast of China and moved to Hong Kong and Sydney, Australia to pursue his studies. He moved to Vancouver, Canada when he was 17 to finish his university education. His vast experiences in all these different cultures shaped him into who he is today.

Aliza Vellani is a Indian-Canadian television actress based in British Columbia. She is most well known for the CBC series Little Mosque on the Prairie as well as the CW series iZombie, and the revival of the Fox series The X-Files.

Velllani’s parents immigrated from East Aftica and she was born and raised in Vancouver. Her love for entertaining began at an early age as she trained in acting, voice, and dance and went to continue on with her passions even after high school. She graduated from Simon Fraser University with a BFA, Majoring in Theatre.

Both these talented actors are outspoken individuals when it comes to Asian representation in today’s media and both carry VAFF’s theme of NO LIMITATIANS well. This year’s theme celebrates the achievements of Asian diaspora artists and empowers aspiring artists of Asian heritage to continue pushing boundaries and challenging expectations. As new filmmakers take the spotlights to tell authentic stories from their Asian and Asian diaspora experience, they break moulds and expose the world to a multitude of voices. They are telling the mainstream, “We are here – now and the future are our chances, and anything is possible!”