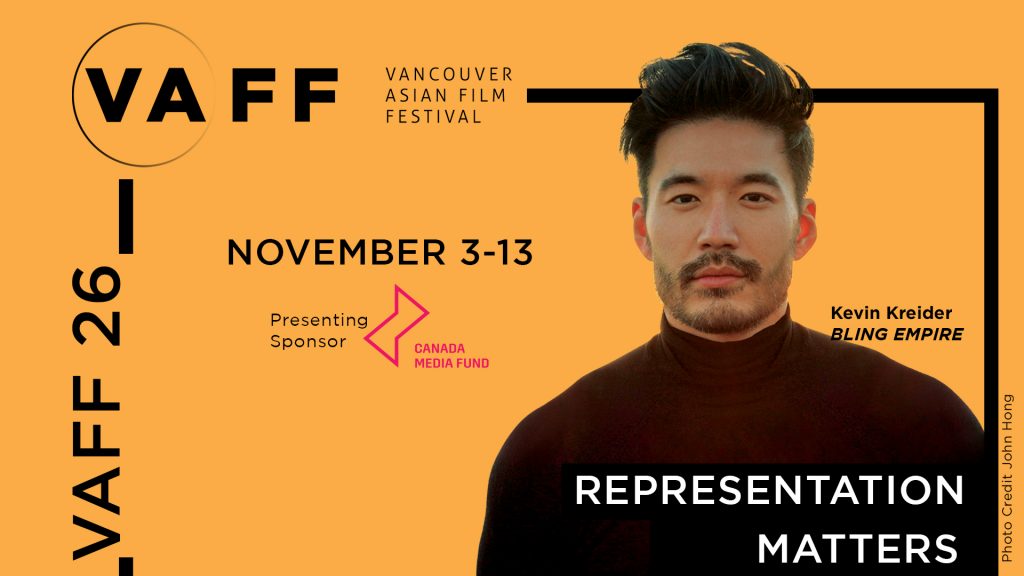 Vancouver, B.C. – Vancouver Asian Film Festival (VAFF) is back celebrating its 26th year with close to 100 films being screened. This year, Netflix’s Bling Empire’s Kevin Kreider is on hand to help launch Canada’s longest running Asian film festival taking place November 3 to 13, 2022 with a hybrid of in-theatre and virtual events.

“VAFF continues to be a premiere event showcasing the creative works of Asian filmmakers on both sides of the camera, promoting Asian culture, inclusion and representation,” said Susan Hanson, festival director, VAFF. “Our 11-day hybrid film festival has something for everyone; from animation films like Demigod: The Legend Begins to industry panels featuring writer/director Kathleen S. Jayme of ‘The Grizzlie Truth’. It all kicks off with our opening spotlight film Stay the Night starring Burnaby’s own Andrea Bang. We look forward to welcoming audiences to VAFF26 this year to celebrate the power of Asian filmmaking.”

November 3 to 6. For the full in-person film schedule, visit: https://2022festival.vaff.org/event-schedule/

“The power of media plays a critical role in how people’s perception of the world is shaped. Negative Asian stereotypes still persist in many forms of media and even though progress has been made in the last few years, there is still more work to be done,” said Kevin Kreider, cast member of Netflix’s Bling Empire and VAFF’s opening night special guest. “For 26 years, the Vancouver Asian Film Festival has been proudly celebrating Asian culture and identity through the festival and I am delighted to be a part of this initiative to help shine a light on positive Asian representation on film.”

Another highlight of the festival is the VAFF Industry Insight Panel Week (Nov. 5 to 12). A series of panels will connect established industry leaders with rising filmmakers and film enthusiasts in a casual setting, cultivating nuanced dialogues about how filmmakers can shape mainstream culture.

“I am passionate about telling meaningful and personal stories through film but I know that filmmaking is a challenging journey, especially for Asian filmmakers just starting out,” said Kathleen S. Jamye, director of ‘The Grizzlie Truth’. “This is why I am thrilled to take part in VAFF’s industry panel this year, to be able to share my journey and lived experiences in the industry with like-minded filmmakers and creatives.”

Jamye will be featured in our VAFF Industry Insight Series – Westcoast Triple Threat Creators chat on Saturday, November 5at 12:00 p.m.

Demigod: The Legend Begins (Taiwan) – Synopsis: When he ignores his master Eight-Toed Qilin’s advice, martial-world fledgling Su Huan-Jen is caught up in a perilous power struggle. Ensnared in a conspiracy that even his own master cannot escape from, Su Huan-jen must turn back the tide and stop the evil mastermind once and for all.

Different Than Before (Canadian Short Film) – Synopsis: Starring Tzi Ma and Olivia Cheng – An Asian Canadian family experiences racism directed at them at their eldest daughter’s engagement party at a karaoke place. The stern Asian father fails to stand up for his family, which disappoints the family deeply, especially his two daughters. When the time comes for his turn to sing on stage, he reluctantly makes his way up to the mic. The song plays, and as he starts singing, the stage transforms into a flashy cabaret, and he turns into a pop icon. In this fantasy world, he is reminded of his memories when his daughters were young and feels hopeful for the eldest daughter’s departure. Vancouver film producer Lynne Lee is available for interviews.

Golden Delicious (Canada) – Synopsis: When basketball-obsessed Aleks moves in across the street, Asian-Canadian teen Jake finds himself trying out for the basketball team to get his attention in this classic coming-of-age drama set in the digital age, filmed and set in East Vancouver. Director and VAFF alumni Jason Karman is available for interviews.

The Grizzlie Truth (Canada) – Synopsis: A superfan sets out to uncover the truth behind the disappearance of her beloved hometown NBA team – the ill-fated Vancouver Grizzlies – in hopes of bringing them back. Directed by Vancouver filmmaker Kathleen S. Jamye. She is available for interviews.

K Body and Mind (Canada) – Synopsis: Kawabi sheds the scars of sickness, hunger, and war—crossing over to a new body at an idealistic start-up, The Grove. When a hostile entity colonizes the minds and bodies of the Grove’s network, Kawabi must rescue her new home…by reckoning with a ghost of the past.

My Perfect Roommate (Korea) – Synopsis: Gum Bun, an old lady who’s lived alone all her life, and Ji Woong, a young college student who’s ready to do anything to earn money, now have to live together for a “Saving Rent Project”.

Opening Film Spotlight – Stay the Night (Canada) – Synopsis: The film centres on Grace (Andrea Bang), a woman who decides to seek out a one-night stand with a man after being passed over for a promotion at work for being too reserved; she hooks up with Carter (Joe Scarpellino), a professional hockey player who is also at a career crossroads, with the two making a more profound emotional connection over the course of the evening than either expected. Starring Burnaby’s own Andrea Bang. Director Renuka Jeyapalan (Toronto) is available for interviews.

The Narrow Road (Hong Kong) – Synopsis: During the COVID-19 pandemic, an owner of a cleaning company meets a young mother and her daughter. Will their encounter save each other during the recession of Hong Kong’s economy?