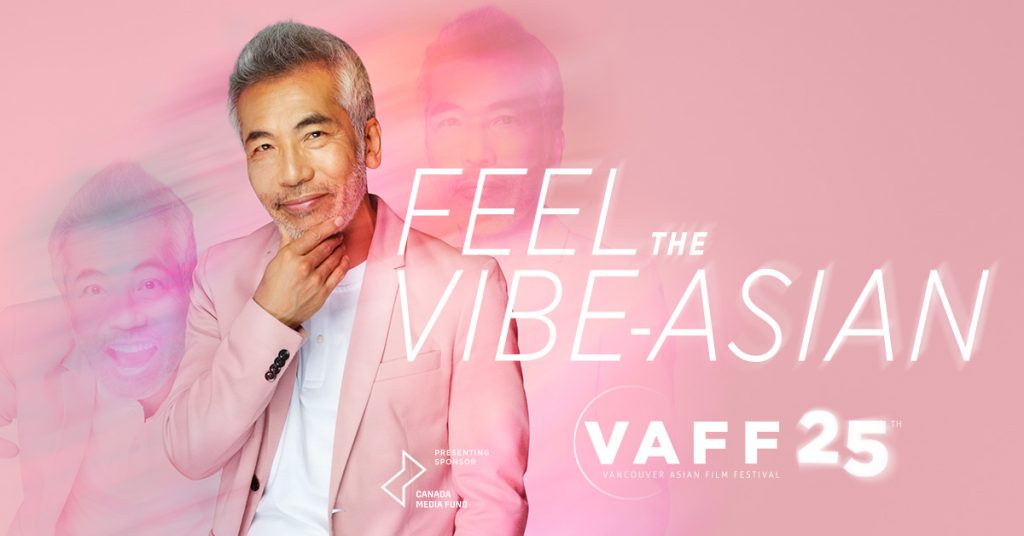 “Feel The Vibe-Asian” has become even more vibrant with Kanagawa on board the 2021 edition of the Vancouver Asian Film Festival in its silver jubilee.

Born in Sapporo, Japan, veteran actor Hiro Kanagawa spent his childhood in Guelph, Ontario and Sterling Heights, Michigan before attending International Christian University High School in Tokyo. As an actor, he has starred in many notable television series, including Altered Carbon, iZombie, The X-Files, and Smallville. As a playwright, he won the Governor General’s Literary Award for English-language Drama for his 2017 play Indian Arm.

Alexis Ocampo from VAFF had a chat with Kanagawa about his illustrious career, what makes a performance meaningful and a role memorable, Asian representation in TV and film, and of course, VAFF!

VAFF: Thank you so much for taking your time to lend your skills over to VAFF! You had quite an extensive career, being in the industry for 30 years. Can you speak to the evolution of the industry as it pertains to Asian-Canadians?

Hiro Kanagawa: I think it’s changed drastically, especially in the last four or five years. There’s no arguing that we live in a world where race hierarchy is an organizing principle. Certainly, when I started 30 years ago, North America, this part of Canada, the United States – even though we have a large Asian population here, when I started out, [the dominant culture] was white, and that manifested especially in representation and access to media. There weren’t that many opportunities in film, television or media for Asian-Americans or Asian-Canadians. I think that has really changed dramatically in the last four or five years especially. VAFF: Looking more to the roles you’ve taken on, what criteria do you go by when choosing film roles, and how does your cultural identity shape those decisions?

Hiro Kanagawa: As an actor, sometimes you just have to take what’s offered. In film and television especially, that’s certainly been the case for a lot of my career. As an Asian-Canadian, especially in the old days,there were roles that were very stereotyped, where the character was perhaps the brunt of comedy. And it wasn’t [the type of] comedy where people were laughing with you, the ethnicity of the character was somehow supposed to be funny, either because they spoke broken English, or there was something supposedly comedic about the way they behaved because of their ethnicity. And in the old days, I did have to turn down roles like that which were essentially dehumanizing towards people of Asian ethnicity. Thankfully, that doesn’t happen very often anymore. People are simply more educated and more sensitive than that. I think over the course of my career, the bulk of my roles have been authority figures – detectives, lawyers, doctors, teachers, and then of course, bad guys, gang lords. But I’ve had the opportunity to play a wide range of roles, and so certainly, in terms of the choices I make, I try to steer away from roles which are stereotyped, or which I feel are two dimensional, as opposed to being fully rounded three dimensional human beings.

VAFF: That segues pretty well into my next question, which is – what is the one role you’d like to be remembered for, and why? VAFF: There’s also been a lot of talk in Hollywood lately about casting decisions not being aligned with the character’s ethnicity. How does a character’s ethnic background influence their ability to play a role, and should the casting focus on ethnicity first and then acting skills, or the other way around?

Hiro Kanagawa: As I mentioned, we live in a world where ethnic [hierarchies] are organizing principles. And so the way that has manifested is obviously in whitewashing where, in the past, there have been many prominent instances of characters that were Asian, originally, but those roles went to white actors. When a particular group has a limited ability to participate, when they’re under-represented and have limited access to roles, is it fair for people who belong to the dominant culture to take those roles away from people? I think the answer is no, it’s not fair. But I’m East Asian. I’m of Japanese ancestry. And we have to face the reality that, because society is organized hierarchically, East Asians, even though we’re not at the top, we are actually privileged compared to Southeast Asians. Someone who’s of Japanese ancestry in Canada is privileged over someone who is let’s say Filipino, or Vietnamese, someone from Central Asia. And so, if there are roles, and this is obviously something that I face and any actor faces – if there is a role and the character is Vietnamese, is it fair for a successful Japanese or Chinese actor to take that role? If characters have iconic cultural significance to a particular culture, then I feel that actors from that culture should be allowed to have those roles.

VAFF: Lastly – how do you think festivals like VAFF help uplift Asian-Canadians in mainstream media?

Hiro Kanagawa: Especially in the old days, when I was starting out – ten, fifteen, twenty years ago – it was a very important outlet for Asian artists to represent themselves and have access to media, because there weren’t many opportunities in mainstream media. As I said, even when someone like me as an actor did have an opportunity to appear in film and television, I don’t have any control over those roles and those stories. So festivals like VAFF are a great way to tell their own stories and represent themselves in the way they want to be represented, as opposed to someone else telling the stories and imposing upon us how we should be viewed or how we want to represent ourselves. It’s a showcase for us, by us, for people like us – and it’s also a way for us collectively to show the rest of the world who we are. And that’s a tremendously important and exciting thing that festivals like this fulfill.

For the latest updates about Hiro Kanagawa, make sure to check out his Facebook and Instagram channels.

Watch this space for VAFF25’s official program announcement in the coming days, along with more interviews and other exciting news throughout the month of October. The 25th Vancouver Asian Film Festival takes place from November 4 to 14, 2021.