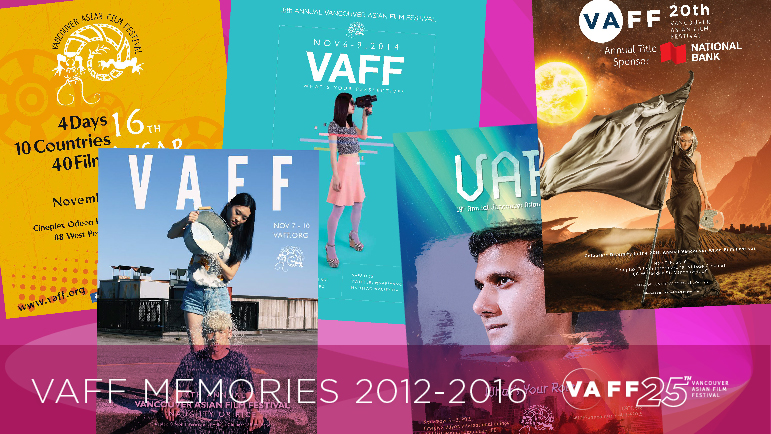 In our penultimate Memories post leading up to VAFF25, we’re highlighting some fantastic fun facts that have culminated into the festival we’ve all grown to love. In this blog post, we’re tackling 2012-2016. Kicking off VAFF16’s Opening Night Gala Party was a fantastic performance from Goh Nakamura and Yea-Ming Chen. Nakamura’s music has been featured in films directed by Ridley Scott including A Good Year, American Gangster and Body of Lies. Nakamura and Chen both starred in I Will Make You Mine, the third installment of a trilogy centered around the main character, played by Nakamura, and his three different love interests. Mind Your Bid-Ness (MYB) was an auction party presented by VAFF as one of its annual fundraising events. VAFF17 saw MYB highlighting South Asian culture, dubbing the fundraiser BOLLYWOOD BID-NESS. In addition to goods, fun services, performances and people auctioned off to the highest bidders, the auction was followed by a dance party hosted by High Society and A-Town Productions. Among the many offerings, attendees bid on laser teeth whitening, hotel stays, dance classes, and cooking packages. In 2014, VAFF introduced the Red Packet Challenge (RPC). The RPC offered an exciting contest where anyone with a video camera or smartphone could get creative and show off their storytelling skills by entering their micro­films to win from a fabulous selection of prizes. With these mini and ultra-shorts, participating filmmakers were offered a unique and modern opportunity for storytelling in a portable and accessible way. For VAFF’s 20th Anniversary, a campaign to put “Asians In Movies” (AIM) was launched to attract North-American Asian models, actors and other leading male and female faces to submit photos, videos and answers to VAFF’s AIM Campaign questions regarding diversity. Twelve candidates across Canada and the U.S. were chosen for a photoshoot in Vancouver, BC in September and the marketing campaign to blitz Hollywood influentials premiered alongside the film festival in November 2016.

Liked what you learned? Check out our previous post in this series here!