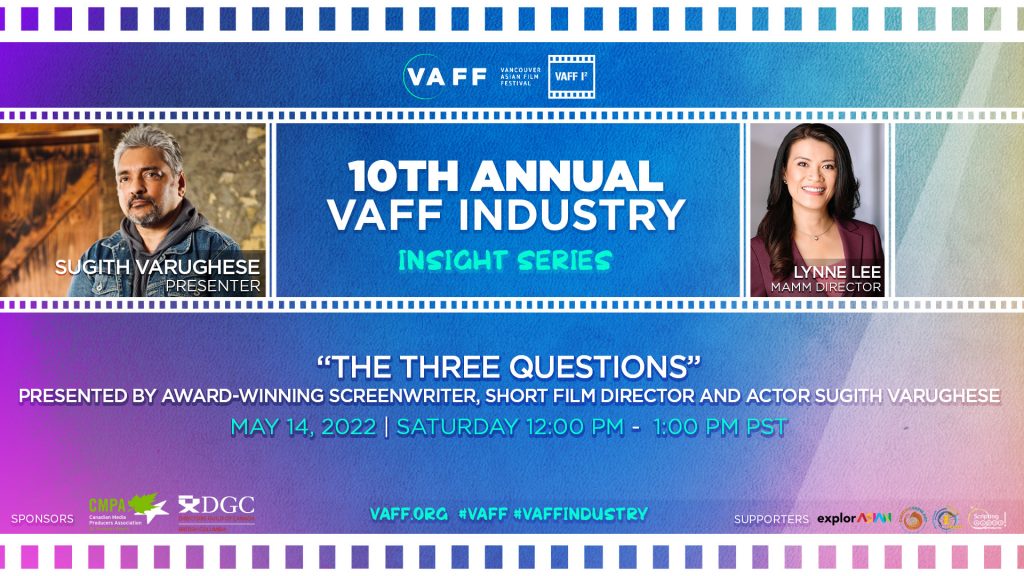 Filmmakers, storytellers, and advocates for inclusivity in film: connect with your fellow creatives at the 10th Annual VAFF Industry Insight Series!

Asian Heritage Month calls on us to reflect on the state of AAPI affairs with respect to entertainment and film. For our 10th Annual Industry Insight Series, we will be addressing the theme of “Celebrate Representation, Opportunity and Evolution” through a hybrid model of in-person, hands-on workshops, panel sessions and virtual filmmaker discussions.

May 14 will be our in-person gathering. Join us from 10:00 am to 1:00 pm at the Brix Studio in Gastown, Vancouver and come ready with your questions for two fantastic sessions surrounding representation in film.

Our virtual sessions start on May 18, when we will be speaking with creatives Domee Shi and Rona Liu from Pixar’s Turning Red. More virtual sessions will take place during the month of May, with details to be announced in the coming days.

In celebration of the upcoming panels, we had a quick chat with actor, director, producer and playwright Sugith Varughese (Kim’s Convenience, Orphan, Transplant) to jump start the conversation on representation in film. Here’s what Varughese had to say:

1) How do you ensure that your work is inclusive?

It’s a balancing act. I’ve often played characters who speak with a foreign accent, while my natural speaking voice is Canadian. I suppose there are those who think that inclusivity is being violated in that the character should be played by a foreign-accented actor, but for me that’s like saying serial killers should be played by serial killers.  What matters is that a foreign-accented actor wasn’t discriminated against in getting the role and if I’m playing it, that the audience who comes from that community believes my portrayal. I have to get it right.

Frankly, I think discrimination is the real problem. Women, minorities, lgbtq are all punching above their fighting weight now far above the actual numbers of us in the industry and that is in part due to inclusivity being mandated. Yet, we are still discriminated against. The numbers don’t lie. Inclusivity is happening, but discrimination remains.

2) You have worked as an actor, director and playwright. What are some insights you’ve gained from this holistic perspective? How has it informed your work?

I broke into television forty years ago as a screenwriter and shortly after wrote a TV movie for CBC that I starred in which is how I began acting. I went on to be one of the writers of the iconic Muppet TV show Fraggle Rock, (the original not the reboot) as well as several other shows. And I’ve acted in over 100 films and TV shows, tons of radio plays, and done several stage plays.   And I was the first minority to go to the CFC as a director and I’ve made lots of shorts and kids dramas and industrials.  I’m also a produced playwright.

And I think if you talk to good costumers, cinematographers, editors, whomever, they’ll all say the same thing.  They are all storytellers. The costumer is telling the story through clothes.  The cinematographer through light and composition. The editor really makes the story all over again through cutting.  If you’re not telling the story, then you’re just dressing people or lighting people.  Learn how to tell stories no matter what job you do in the business. If I could put on my passport my profession it would be professional storyteller.

3) Art imitates life. Are there any key moments from your own experiences that have inspired your iconic characters?

I’m lousy at making stuff up, but I’m really good at stealing from my life for my work.

When Kim’s Convenience ended, I texted Paul, who played Mr. Kim and said, “isn’t it great, we got to play our dads.” So my father was inside Mr. Mehta, but also someone else I knew who I stole Mr. Mehta’s shouting speech pattern from.

My father was a neurosurgeon, so I also channel him playing a surgeon on Transplant on CTV and NBC.  I was in the operating room with my father a couple of times and got to see how he worked, how he talked to the rest of the OR staff and how he treated the procedure and the human body like an engineer dismantling a wondrous machine and so I bring that to little moments in the show. I don’t know if anyone would notice, but I do it because it is my way of being truthful.

While we’ve cast our gaze time and time again on those in front of the camera, it’s time to take a sneak peek at those hard at work behind the scenes. What are the thought processes that have molded and refined the films you watch? What does ‘representation’ mean to these creatives? And how can we do better by the voices we aim to help highlight and amplify?

Don’t miss out on this opportunity to gain insider perspectives and industry insights from those who aim to address representation throughout all parts of the creative process.

To check the full schedule and to register for our 10th Annual VAFF Industry Insight Series – starting with our May 14 in-person event and continuing online throughout the month of May – please visit: https://vaff.org/vaffindustry2022/