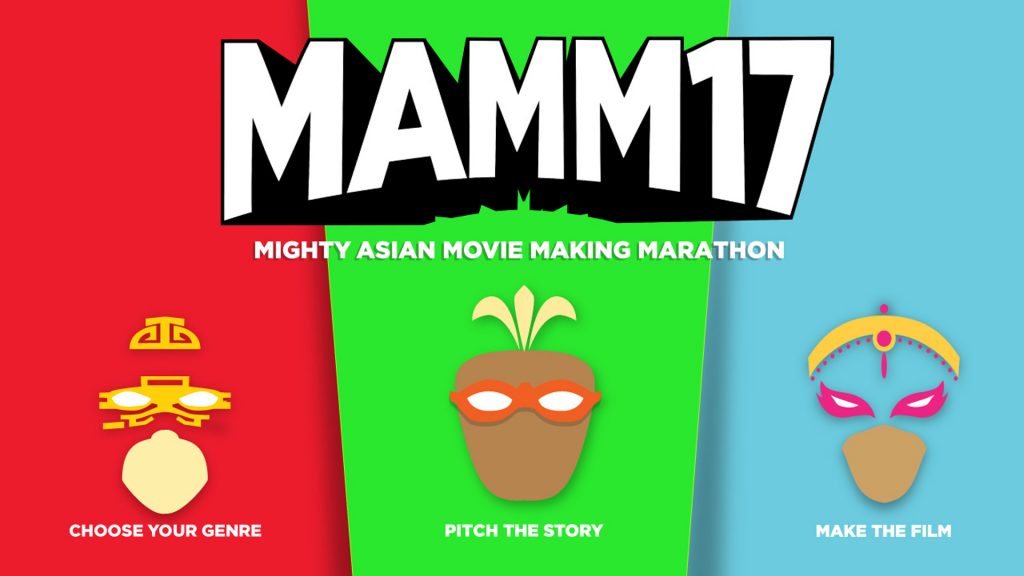 Unlock the MAMMer in you & Compete in Season 17 of the Mighty Asian Moviemaking Marathon!

The Mighty Asian Moviemaking Marathon (MAMM) is back as Vancouver Asian Film Festival’s premier annual short film contest. The event, now in its 17th edition, invites all aspiring filmmakers to become MAMMers and submit their pitches for Vancouver’s only annual short filmmaking competition, with representation as this year’s specific focus.

MAMM is undergoing a few changes in 2022. The selected 8 teams of 10-minute shorts will receive $1,000 per team while the 1-minute Ultra Shorts category will collaborate with Elimin8Hate (E8) to bring awareness to their “Reclaim Your Name” campaign. Like last year, the 10-minute shorts will require a video pitch, while the 1-minute ultra shorts will also go through an adjudication process based on a written pitch. Pitches must incorporate the following:

1-minute ultra shorts – respond to the theme of “What’s in a name?”

Please note: Film production must follow WorkSafeBC health & safety protocols strictly, and each team must come up with their own COVID-19 Safety Plan for their teams with the help of the MAMM production team.

There will also be a continuation of the successful MAMMentorship program from previous years. The program features guidance from industry professionals in a series of one-on-one mentorship opportunities as well as group workshops via Zoom. All completed films will receive a screening at the MAMM17 gala & awards ceremony in August, in addition to VAFF26 in November. Final films will be adjudicated by a panel of elite MAMM17 producers, and the top films in each category will be chosen to win cash and in-kind prizes!

Joshua Lam focuses on Producing, Directing & Writing stories that blend themes of cultural tradition and identity with a zest of humour. After graduating from University of British Columbia in Film Production and Creative Writing in 2019, Josh aims to foster connections in the Greater Vancouver Arts & Entertainment community. Josh works with the VANCOUVER ASIAN FILM FESTIVAL in their VI² INDUSTRY PANELS & annual MIGHTY ASIAN MOVIEMAKING MARATHON streams as a Creative Producer, and is currently under the 2021 – 2022 Canadian Media Producers Association Mentorship Program with BRIGHTLIGHT PICTURES. Moheb Jindran is a Filipino-Indian-Canadian writer, producer, and actor. His notable work includes producing the Crazy8s 2021 Top 6 Finalist “Cuello”,  producing and acting in “Switch City”, which went on to win Best Film at MAMM16 in 2021 and, most recently, starring in the Crazy8s 2022 Top 6 Finalist “Imran and Alykhan”.  He has always had a love for bringing people together, and strives to create platforms for others to share their messages across all mediums.

Having competed in MAMM for the past 4 years, I have nothing but gratitude for this competition and the people behind it. Joining the MAMM Producing Team this year allows me to give back to this community that has given me so much – I’m thrilled to get it all going! Panta Mosleh is a (West Asian-Middle Eastern)Persian-Canadian LGBTQ2SiA+ Producer-Director-Actor-Writer. She is a CMPA Producer, a WIDC alumni Director and the recipient of the SNL Scholarship for school of comedy. She has also been selected for Reelworld Waner Media/Bell Media producing program, the NSI EAVE development program and the Banff/Netflix Diversity of voices. She is the recipient of Best Film at MAMM16 in 2021 for SWITCH CITY with Moheb Jindran and the Crazy8s Producer in 2021 the film BABA with Jay Kamal and Javier Badillo. Her series PASS THE SALT is in Pre-Development through and LOI from CBC and a pre-development fund from CMF. Her goal is to have equality and inclusivity both behind and in front of the camera.

In 2021 experiencing MAMM with Moheb and seeing the diversity in this competition and how much was given to us throughout the experience made me feel like I want to give back and support through MAMM/VAFF to the next generation of filmmakers and help foster new talent in our film community as well.

We would also like to acknowledge and thank Mayumi Yoshida, Nach Dudsdeemaytha, and Arnold Lim who all contributed greatly as members of the MAMM creative production team last season.

Online registration and information for MAMM is now open between June 1 – 24, 2022! For early bird submissions (June 1 – 7), the registration fee is $50 per team for the 10-minute Shorts category and $10 per team for the 1-minute Ultra Shorts category. The cost for submissions made during the regular period (June 8 – 24) will change to $60 and $15 respectively. The 10-day film production / post-production period runs from July 29 to August 7, 2022.

BONUS: Sign up for the June 8th virtual info session to learn more about the competition and tips on how to pitch to MAMM17.

The top films will be selected by the judging panel, and winners of the People’s Choice Awards will be announced at the MAMM17 Gala Screening & Awards Presentation on August 26, 2022, before being screened at the 26th Annual Vancouver Asian Film Festival from November 3 to 13, 2022.

What is the Mighty Asian Movie Making Marathon (MAMM)?

MAMM is VAFF’s premier short filmmaking competition, entering its 17th consecutive year as a platform for emerging Asian and mixed Asian filmmakers to access educational experiences and opportunities to showcase their talents to audiences and potential distributors alike. The now 10-day filmmaking contest has culminated in over 150 MAMM films since its start in 2005, continuing to incubate, nurture, and support many more talented creators with each passing year.