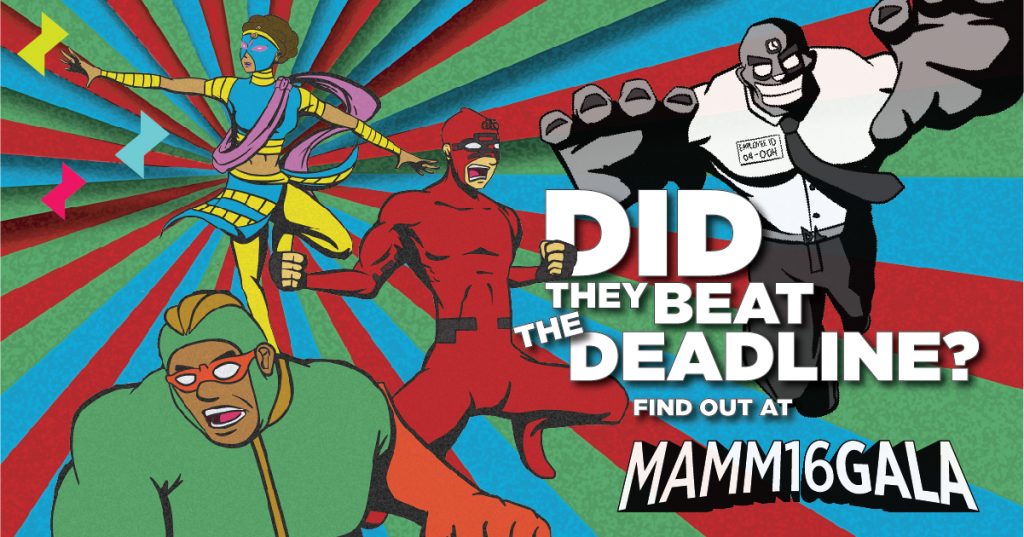 The MAMM Chronicles: The Whole Saga

Catch up on the entire series right here in one place

If you’ve been checking out our social media channels this summer, you’ve definitely come across the world of the MAMM Chronicles. From June to August, the fortnightly six-episode mini story has followed the journey of this year’s MAMMers under the guise of superheroes fighting a villain in an alternate universe where they have to save filmmaking from extinction. We’ve followed the adventure our MAMMers have embarked on in the image of writer Avant, cinematographer Illume, and director Opus, from submission of their film proposals all the way till the execution of their projects and their upcoming screening at next week’s MAMM gala.

We bring you the entire MAMM Chronicles saga, all in one place, for your reading enjoyment. And if you’re joining the live stream of our MAMM gala on Friday, August 27, you’ll be happy to know that the story doesn’t end here and the saga will continue at the ceremony. Make sure to tune in to our MAMM gala webcast to find out more!

Details of how to access the live stream can be found here. Meanwhile, these are the MAMM Chronicles in all their glory. Introducing: the MAMM Chronicles. You may have seen by now our announcement of this year’s Mighty Asian Movie Marathon, and you may be wondering what that image with the 3 masks is all about. Today, we’re going to tell you the story of where it all began… As a result of the events of this past year, cinemas and movie theaters have had to shut down, forcing people to stay home. With limited entertainment options, everyone has turned to watching movies from the comfort of their own homes. But just when people thought things couldn’t get worse, a new villain emerges. His name is Deadline Hour Zero and he has the superpower of making things go extinct. He gives the world an ultimatum: submit a movie proposal by June 15, 2021, or face the disappearance of filmmaking forever!!! The world needs a new hero to rise to this new challenge. Will they step up to the plate and end the wrath of this feared and universally loathed enemy? Find out during the next installment of the MAMM Chronicles. Two weeks ago, we saw how the world faced an Armaggeddon-style disaster: the rise of Deadline Hour Zero, public enemy #1, threatening to make filmmaking go extinct unless a movie proposal is turned in by June 30, 2021. Deadline Hour Zero, who also goes by the codename 04-00H, is really competitive and is certain no one will rise to the challenge or defeat him. The world is watching with tremendous worry and absolute horror. Enter Avant. He works as an investigative reporter for the local newspaper. After seeing 04-00H in the news, he decides to take matters into his own hands and takes it upon himself to beat the deadline. He labours tirelessly for days and nights on end, adamant on saving humanity from a world without art and film. Just days before the deadline, as 04-00H begins to rejoice at the prospect of winning, Avant secretly completes his script without telling anyone. As he fears retaliation from 04-00H, he keeps his big reveal under wraps until moments before the June 30 deadline. Deadline Hour Zero is in for a nasty surprise! Find out what happens to the villain we love to hate on the next installment of the MAMM Chronicles two weeks from now. What has our superhero Avant been up to since he took it upon himself to save the world from the villain Deadline Hour Zero – aka 04-00H – at the end of last month? After submitting his film project proposal to save the planet from an existence devoid of cinema, he got the happy news he was hoping for: his project got picked up for production. Another race against time ensues, as he now has to quickly assemble a team to bring this project to life. Meanwhile, in another part of town, a very talented and dedicated performing arts teacher wraps up another day of work at her local primary school. Even though her days are peaceful and uneventful, her life is about to be turned upside down. She follows the news of 04-00H closely and sees a video of Avant on social media in his quest for collaborators. She suddenly feels the urge to do more to save the world. She reaches out to an equally talented and artsy friend, who happens to be friends with Avant and is considered a nurturing older brother. That friend arranges a meeting. “Please call me Illume,” she says. Avant is impressed with Illume’s talent. He thinks she should oversee the photography of his movie. Will they be productive creative partners? They’ve both taken on the responsibility of fighting the good fight, so they get to work immediately. The stakes are high. Movie fans are on edge. How will Avant and Illume prepare for battle? Join us again in 2 weeks as the story continues… The MAMM Chronicles continue, and our dream team of Avant and Illume are scrambling to complete their crew and start production on their world-saving movie. While doing so, they sign up for film workshops and get mentors to brush up on their filmmaking skills. But in the midst of their busy lives, with audiences eagerly awaiting their return to cinemas to watch the movie in question, one important question looms over: Where is Deadline Hour Zero? There have been rumours he caught word of our superheroes’ plans and is now planning on retaliating… But wait a minute, wasn’t the deal to save movies from extinction contingent on submitting a movie proposal, and Avant did just that? What Avant & Co. don’t know is that the movie proposal is one half of the deal, and Deadline Hour Zero purposely kept the terms of his ultimatum ambiguous to give him more leeway into making his return should things not go his way, which is precisely what has happened. So unless the film project is completed, Deadline Hour Zero will return in the next 30 days bigger and more dangerous than before. Are we back to square one? Is the world in danger again? What is that odious villain up to now, and how, where, and when exactly will he strike again? Find out in two weeks, only on the MAMM Chronicles. What a sad sad life it would be if humanity had to live in a world without movies. That’s exactly what Deadline Hour Zero wants. Will he get his way? Why is he so angry after all? Believe it or not, our villain wasn’t always evil. He’s a victim, too. You may have read in an earlier episode that he also goes by the codename 04-00H, which used to be his employee ID number… at the local movie theatre! Well, that’s rich for a movie-hating villain! 04-00H is a disgruntled former employee, who was terminated from his job for not meeting his sales target. The loss of his beloved career did such a number on him that it turned a once film devotee into the world’s worst threat against filmmaking. He’s so filled with rage that he wants to bring down Avant and his team at any cost. What is our writer going to do? He’s busy finding the last missing piece to his puzzle: a director. “How about Opus?” says Avant to Illume. “He did introduce us to each other after all.” Even though Opus is an accountant by day, his hobby by night is to volunteer at Vaudeville, a major theatre where he oversees and directs plays. Will our friends convince Opus to get on board? It’s a race against time, as they’re only days away from a new deadline: the movie’s completion. “Hurry up peeps! You’ve been warned,” yells an arrogantly confident 04-00H with a defiant grin in his latest video announcement. “You know what you have to do if you dare! Gotta get to work and get that movie completed or face a world where movies are extinct… forever!!!” Will Avant and Illume beat the deadline? Find out during our grand finale in two weeks. Previously on the MAMM Chronicles, Deadline Hour Zero, aka 04-00H, is threatening to make movies extinct, unless someone makes a movie from A to Z. Our hero, investigative reporter Avant, decides to rise to the challenge by writing a story for a movie. He meets performing arts teacher Illume, who joins his project as cinematographer. The two of them are on a quest to find a director. Avant suggests their mutual friend Opus, who volunteers at the theatre establishment Vaudeville. Will they convince him to get on board? They have to keep a low profile after 04-00H finds out about Avant’s story and decides to impede his team’s efforts. “I will not let those fools take me for a ride,” he declares in his latest podcast. To avoid raising suspicions, Avant and Illume meet Opus inside Vaudeville’s costume room. He’s instantly in. “Spontaneity is the spice of life,” quips Opus, an avid fan of improv. Together, they hatch a winning plan to beat the deadline. Their creative juices are flowing, as they’re now focused on one common goal: defeat Deadline Hour Zero no matter what it takes! It’s a race against time, but they have all it takes to make it. They work their tails off for 10 days and 10 nights, putting the finishing touches to their film, and just before 11.59pm PDT on the day of the deadline, they manage to upload their film. 04-00H receives the news of what he considers the ultimate tragedy: a movie has just been completed and he’s the losing party. He makes a run for it and disappears out of sight. Perhaps he’s gone for good this time. Perhaps he will retreat to a quiet place to think about his actions and how his hatred failed him miserably. As for the rest of us, we’re back to our happy place as our movies are finally saved from extinction.

The end. For now.