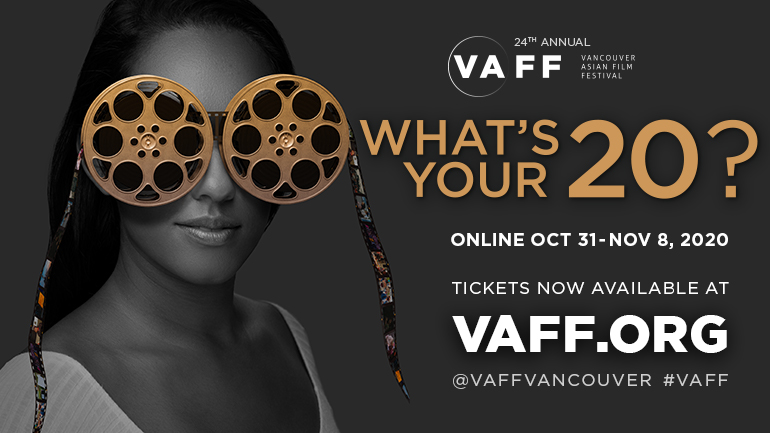 The entire festival program and tickets are available online from October 6 till November 8, 2020 at www.vaff.org.

Vancouver, BC – October 6, 2020 – The Vancouver Asian Film Festival (VAFF) is pleased to announce the countdown to its much anticipated 24th annual celebration of diversity in film and the Asian diaspora, brought to you virtually (#VAFFVIRTUAL) from October 31 to November 8, 2020 in the comfort of your home, with a few surprises in store.  This year’s festival will run for twice as long as past festivals, allowing us to bring you more exciting content than ever before.

This year, with everyone having such a challenging year, VAFF wanted to break the mould and bring some fun to the community by presenting a Halloween Screening on Opening Night, October 31, 2020, live at the Cineplex Odeon International Village, adhering strictly to CoVid-19 protocols of no more than 50 people.  This festival will offer the largest program we have ever presented and bonus content exclusive to VAFF, as we take advantage of the flexibility of video-on-demand programming.

VAFF’s programming continues to showcase the breadth and depth of Asian diaspora filmmaking beyond mainstream film festival offerings, with expanded programming that reflects relevant, pressing issues faced by immigrants, women, and marginalized individuals.  The VAFF 2020 lineup showcases 18 film programs of industry panels plus 46 feature-length and short films of all genres, in English and/or with English subtitles, from the local and international Asian diaspora. Highlights from the festival with mostly films never before seen in Canada or Vancouver include:

We continue our VAFF Industry Panel Series with “how to” panels under VAFF I²  in Who Wants to be a Talent to Watch? & Elimin8Hate that challenge us with burning questions on Model Minority Myth on Film and Elevating Underrepresented Voices in Film, Television and Media. In addition to the Best Canadian Director Award sponsored by the Directors Guild of Canada, and Best Canadian Film Award sponsored by Telefilm, we will be awarding Best Canadian Cinematographer awards; as well as the various audience favourite People’s Choice Awards, all to be presented during the festival.

With our lifetime patron, Richard K. Wong generous support, we launch “RICHARD K WONG FILM FUND (RWFF), aimed to support talented Asian Canadian filmmakers and TV producers, to develop, produce, and finish creative projects that raises the profile of Asians in Canada. Our stories are important and we want to give you a chance to tell it. The Film Fund will be available in 2021.

We are proud to bring Vancouver audiences 5 World premieres, 12 North American premieres; 13 Canadian premieres, and an additional 7 films that are Vancouver premieres, and even more excited to announce that close to 60% of all films are directed by women. Organizers anticipate 4,000 audience and industry members over the extended eight days festival.

The Vancouver Asian Film Festival is the longest running Asian film festival in Canada. Founded by independent filmmaker and writer Barbara K. Lee in 1995 to celebrate diversity in film, the festival has grown to provide an engaging platform for Asian filmmakers to showcase their talents. The VAFF is run by The Vancouver Asian Film Festival Society, a not-for-profit organization comprised of a group of dedicated volunteers. Sponsors and community partners alike also contribute to the success of the organization. Now on its 24th year, the event only expects to grow even bigger. Close to 4,000 people are expected to attend the festival.