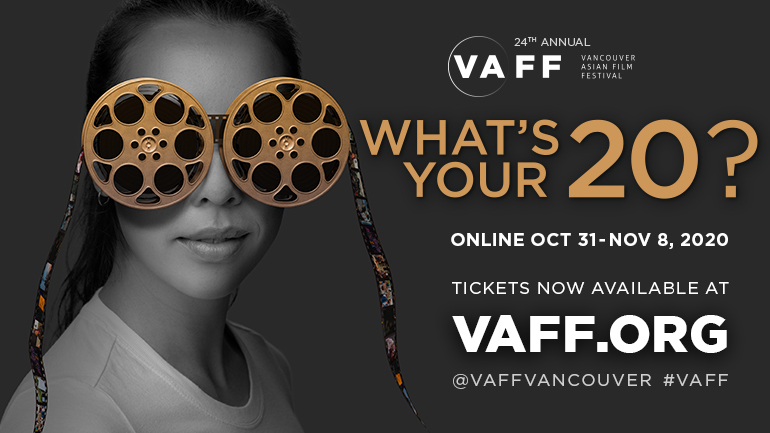 Get your home theater ready for VAFF2020!

Join us for our very first virtual festival!

We welcome you to attend the 24th Annual Vancouver Asian Film Festival (#VAFFVIRTUAL) October 31, 2020 to November 8, 2020. While things may be operating a little differently this year, our featured films are sure to take you up close and personal into their stories (without the social distancing). The lineup showcases 18 film programs of industry panels plus 46 feature-length and short films of all genres. To better highlight the diversity of our content, we’ve split it into different series including: Spotlight Series, Documentary Features Series, Narrative Features Series, Canadian Shorts Series, International Short Series, VAFF Industry Insight Panel Series and Special Events.

This year we are exploring the theme of “What’s Your 20?”, the radio code widely used in the film industry that means “where are you?” or “what’s your location?”. In the year 2020, we play on the numbers to pose this question, which can be interpreted physically, intellectually and philosophically. No one could have predicted the unprecedented global transformation that 2020 would bring. We are getting up close and virtual with the filmmaker’s psyche, through exploring the monumental impact of global change on storytellers of Asian heritage.

Likewise, we are catering to what our audience needs and giving you the opportunity to personalize your viewing experience. Check out these ways that you can enjoy the Vancouver Asian Festival like never before!

A good movie always needs some good snacks. Make yourself something tasty while you settle down to watch these thought-provoking films. They’ll be sure to whet your appetite!

From the Features Series comes two documentaries, First Vote and Curtain Up! First Vote follows four Chinese American voters’ first-time electoral organizing in two battleground states during the 2018 midterm elections. In Curtain Up! elementary school kids in New York’s Chinatown prepare for a production of “Frozen Kids” while grappling with their Chinese roots behind the scenes.

Satirical comedies, Little Miss Period and Secret Zoo, both premiering in Canada for the first time, explore universal issues with laughter and wit. A woman’s period is personified in Little Miss Period and wreaks havoc on the lives of the film’s female characters. Secret Zoo has a young lawyer trying to run and save a zoo that has sold most of its animals. Get your Blood Pumping

Staying still for too long isn’t good for your body or your mind. Get both moving as you watch these heart-pounding films while doing some light exercise.

Opening this year’s festival is the Korean box-office hit The Closet, which is making its North American debut. Sang-won must look for her daughter Ina, who mysteriously disappeared. On the other side of the festival is the closing film Beyond the Dream, which tells the unlikely relationship between a recovering schizophrenic and a psychological counselor with a hidden agenda.

Follow a cast of over fifty characters in Gyopo as they navigate the streets of Seoul; filmed with no script and no crew, these English-speaking Korean expats are at once immersed in, but apart from, Korean culture. Pile some pillows onto your couch or get comfortable under your bed covers. These stories about self-discovery will reveal fundamental truths about our existence and keep you company well into the night.

Sue is preparing to leave her hometown to study abroad in Where We Belong; as she packs and goes around town one last time with her best friend Belle, she wonders where she’s truly meant to be. The Donut King follows the rise and fall of Ted Ngoy, a Cambodian refugee who escaped to America and went on to build an empire baking America’s favorite pastry, the donut.

One of the winners of our very own Mighty Asian Moviemaking Marathon is Srikandi, the modern retelling of an Indonesian myth; through the art of shadow puppetry, also known as “Wayang”, Anjani has a final moment with her recently deceased father. Whether they’re right beside you or on the other side of a screen, connect with others as you watch these films about relationships. They may deepen your understanding about others or spur meaningful conversation.

In White Elephant, 16-year-old Pooja finds herself violently torn between her crush on a white boy, and her Brown and Black friends. Ultimately, her relentless search for love really becomes a journey towards self-love. Two daughters with opposing views grapple with their terminally ill mother’s decision to assisted suicide in And Now This? The 24th Annual Vancouver Asian Film Festival lineup and tickets are available now! E-Tickets and ALL ACCESS passes are available online from NOW till November 8 at 9:00 pm. Join us online for live events, have some of our favourite films on demand, or maybe we’ll see you at our socially distanced screening!

Check out these guides for more technical information on how to watch VAFF live virtually, on demand, or how to attend an in-person screening.

Lilly Lin is the content and copywriter at the Vancouver Asian Film Festival. She is a graduate of UBC with a degree in English Literature. Although her degree has been collecting dust at the bottom of a suitcase for the past few years, she’s glad it’s seeing some use at VAFF. She looks forward to learning and growing with the team