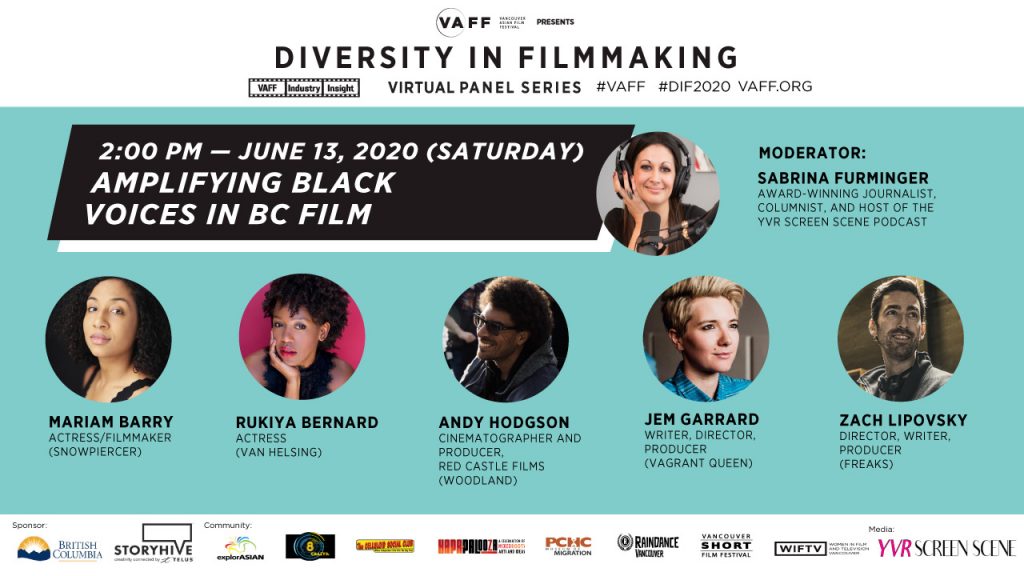 What can we do to support black artists?

In light of recent events pertaining to the Black Lives Matter Movement, the Vancouver Asian Film Festival is dedicating its last virtual “Diversity in Filmmaking” panel series to amplifying local black voices to better understand what we can do to support the black community.

For our final panel we were given the opportunity to have a much needed discussion on how those in the film industry can better amplify black voices. Award-winning journalist, Sabrina Furminger (host of YVR Screen Scene Podcast), moderated the discussion between Mariam Barry (actress, filmmaker, Snowpiercer), Rukiya Bernard (actress, Van Helsing), Andy Hodgson (cinematographer, producer, Red Castle Films, Woodland). They were listened to and later joined by Jem Garrard (writer, director, producer, Vagrant Queen) and Zach Lipovsky (director, writer, producer, Freaks). Through an honest discussion of how black artists experience the local film industry, the non black film community is given ways to ensure their voices are being heard in meaningful ways.

Racism exists in the Vancouver film industry through a variety of factors. At the risk of their careers, Rukiya, Mariam, and Andy discuss navigating these microaggressions while still remaining a team player on set. Microaggressions, as Ruyika explains, may sound like innocent comments but they create a distinction of black people as “other”. For example, when black actors are asked to act more “urban”—this is a huge microaggression that demands black actors perform a version of blackness that is irrespective of their own identity. They also shared their experiences in the local film industry of navigating the politics of black hair in makeup rooms, talent in producing rooms, and the lack of main role casting calls.

With Vancouver as a “service town” (meaning that majority of content produced is american), Mariam notes that we need allies at the top advocating for black leads, not just in Vancouver but everywhere. With the direction of the movement through social media, whether or not we’re all heading in the right direction is hard to say. Rukiya is hopeful from hearing allyship from people who don’t look like her and Andy agrees that the money exchange is what will empower those at the top to support the black community. Initiatives like grant platforms for black creatives is what creators like Andy would like to see going forward.

When Jem and Zach joined the conversation, they shared their experiences being in rooms where we usually don’t see people of colour. The biggest issue they find is the fact that excuses for not having more diversity get pushed to the top. People blame upwards when they can’t hire or support black voices but these are excuses that don’t lead to change. When we deflect we can’t change ourselves. One small but significant starting point for Zach is now making sure his black actors get hairstylists that understand and respect black hair. It’s all about making these conscious decisions and listening to what black artists need.

Going forward, it’s all about questioning our initial reactions and having those uncomfortable discussions on why we don’t see more black pioneers in the film industry. Why actors like Rukiya have to teach hair stylists to do her hair when there should already be hired professionals to do it. As allies, our black panelists encourage us to keep educated on the language we use and the context of it while showing an open heart and be willing to grow. For people of colour that are under-represented in media, Rukiya encourages that they continue to work on their talents and uphold great storytelling. Hone your craft and keep on working on your own path.

This recap only brought you a small portion of the intimate discussion, and if you’re interested you can watch the full panel here.

This special edition of DIF is also our last panel for the season.  Thank you to our creative producers Mayumi Yoshida, Nach Dudsdeemaytha and Joshua Lam, as well as producers Arnold Lim, Lynne Lee and Regina Leung for making this all possible.