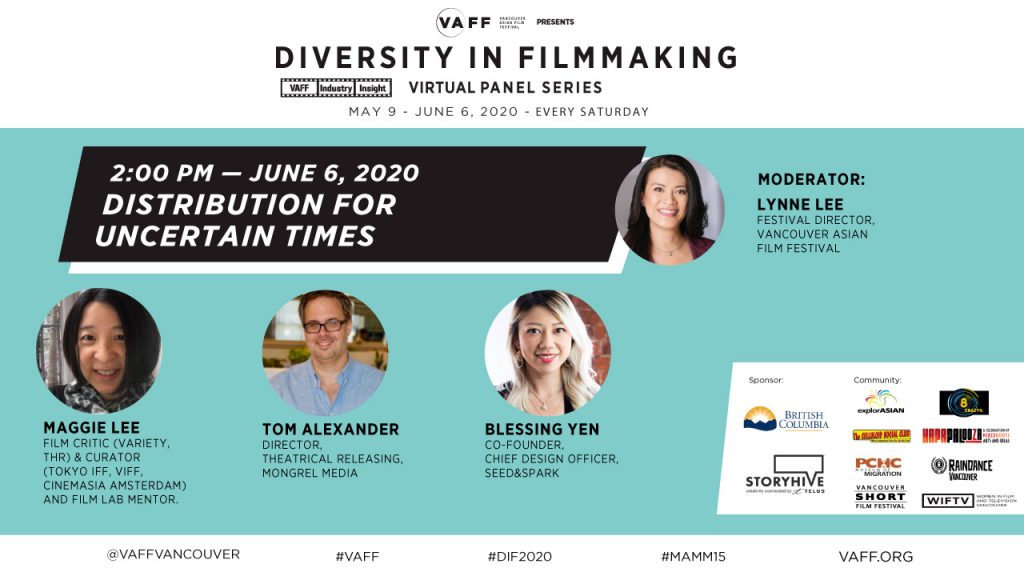 The future of film festivals post-pandemic.

In an informative panel on animation, a multitude of accomplished artists contribute their experiences working in the industry. Our festival director, Lynne Lee, moderated the discussion between Maggie Lee (film critic (Variety, THR), curator (Tokyo IFF, VIFF), and film lab mentor), Tom Alexander (director of theatrical releasing, Mongrel Media), and Blessing Yen (co-founder & chief design officer Seed&Spark). These industry leaders gave us insight as to how film production companies are realigning priorities due to the pandemic.

What are the benefits and shortcomings of the online experience? On the positive side, people have more access than ever to film festivals, from Tokyo to Denmark, that they normally would not be able to attend. The rush to catch screenings and having to choose between films is no longer an issue. On the other hand, filmmakers, producers, and audiences are not able to have that intimate connection and discussion following film screenings. There is a lack of “specialness” of making the trek (often internationally) to see films, as well as a lack of impact watching from a computer screen. A huge challenge these panelists now face is creating an engaging environment between the audience and film.

However the outlook on the future of the film industry remains positive as people are watching more now than ever. Blessing gave important advice for creators to own their career and focus on building something sustainable rather than waiting for a ‘big break’. Maggie is excited that international filmmakers, especially in Asia, are gaining more exposure and funding through the online communities as well. The importance of storytelling still has not been lost. “A diverse voice needs to keep that voice, sometimes these diverse voices get diluted” as Tom stated. In light of the Black Lives Matter movement as well, it is important for producers to reach out, develop and collaborate in order to broaden our perspectives.

Above all, our panelists can agree that there is a need to find a new “normal” as consumer preferences shift. At the same time our panelists remain hopeful that film festivals will eventually be reintroduced. However, the main priority, as Tom noted, is that audiences coming back to theaters need to feel safe, especially the older demographic that is currently the most vulnerable.

If you’re interested in delving deeper into this conversation, you can watch the recording here.

Stay tuned for our final DIF, this Saturday to explore how CoVid-19 has impacted all aspects of filmmaking and filmmakers’ lives.  Our creative producers Mayumi Yoshida, Nach Dudsdeemaytha and Joshua Lam, as well as producers Arnold Lim, Lynne Lee and Regina Leung will lead a panel discussion each week about different areas of film development and production and addressing issues arising in these unprecedented times.