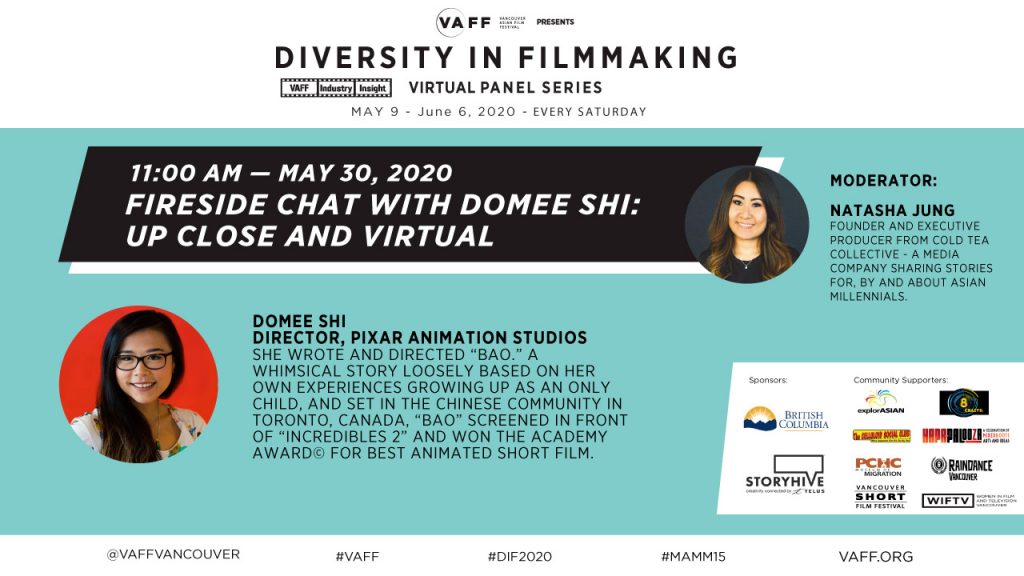 Up close and virtual with the director of “Bao.”

This week we had the writer and director of “Bao”, Academy Award winner (Best Animated Short Film) Domee Shi grace us with her insight and experience working for Pixar Animation Studios. She was interviewed by our creative producer Natasha Jung from Cold Tea Collective.

Domee discusses her career, unexpected obstacles, and how she celebrates her Asian heritage in her work. For fans of “Bao” she gave insight to the process and how working at Pixar gave her the resources to create such a high quality feature film. “Bao” celebrates her experiences as an only child growing up in a Chinese Canadian community, that also manages to touch and inspire those without that experience. Through their discussion of how small yet significant choices build cultural meaning while avoiding generalization of Asian cultures, it is inspiring to see a greater demand for unique voices in film.

For those interested in creating film that is culturally specific yet resonates and educates a general audience, Domee suggests finding that universal truth or ‘in’ within your narrative. Build a relationship with your producers who may not have the same background as you, get to know them as people with their own values and nuances. As an audience member, it is evident that her insight and genuine passion for storytelling is truly reflected in her work.

After what Domee describes as a small slice of fame after winning the Academy Award, her life and work have continued on as normal before “Bao.” Fans of Domee can look forward to her next feature film project that she is currently directing, that may or may not (but most likely will) be heavily influenced by her personal narrative.

If you’re interested in watching the fireside chat with Domee, check it out here.