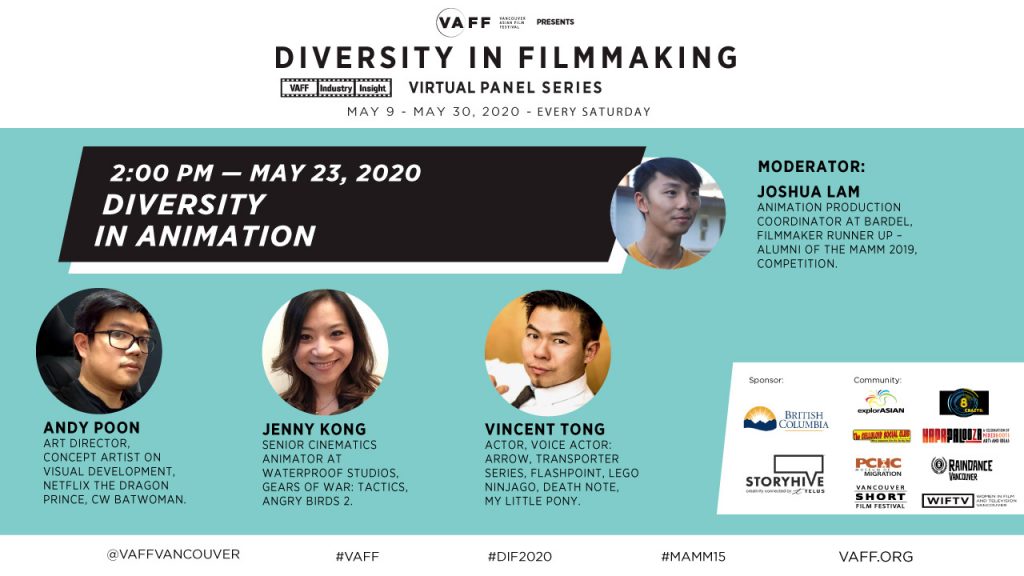 Celebrating diversity in the modern age of animation.

In an exciting panel on animation, a multitude of accomplished artists contribute their experiences working in the industry. Our creative producer Joshua Lam moderated the vibrant discussion between Vincent Tong (actor, voice actor: Arrow, Transporter Series), Andy Poon (art director, concept artist: Netflix’s The Dragon Prince, Visual Development), and Jenny Kong (senior cinematics animator at Waterproof Studios: Spider-man: Into the Spider-verse, Gears of War: Tactics). These artists discussed personal experiences with diversity while taking us on a deeper dive through the stages of the project pipeline.

One of the most important factors that play into the work of these animators are their backgrounds and childhood inspirations that help them bring life to their work.

For Andy, it was growing up in Hong Kong and dreaming of being a comic book artist, while learning the different subtleties of Western and Japanese styles of animation. Vincent’s love for Disney and musical theater has shaped how he is able to bring depth to his characters and throw us back to Prince Aladdin or Eric when hearing his hero voice. Jenny credits her major inspiration as Final Fantasy X, as well as the high quality of popular animes she watched growing up that she now tries to match with her work.

While the pandemic initially slowed things down for animators like Jenny, her team has now fully adjusted to communicating through their headsets. Andy notes his work has gotten even busier with that added responsibility of preparing work once restrictions are lifted. Vincent as well has been working within the studio with strict protocols in place to protect himself and the production cast. Beyond these unprecedented times, this momentum will not be lost and the animation industry continues to remain strong.

Above all, our panelists all agreed that the animation industry is increasingly celebrating diverse backgrounds and experiences. With productions like “Hair Love” and “Bao” receiving critical acclaim and such a huge positive response, these artists believe this is just the beginning for greater representation in animation. Victor adds that his repertoire of characters he has voiced has ranged from a redhead child to a tomato with everything in between. He adds, “ the cool thing about animation, is that if you are the most talented, you will get the job which is so great”, ending the panel off on a positive note.

If you’re interested in watching the panel discussion (and hearing Vincent give us some great character snippets!), you can watch the recording here.