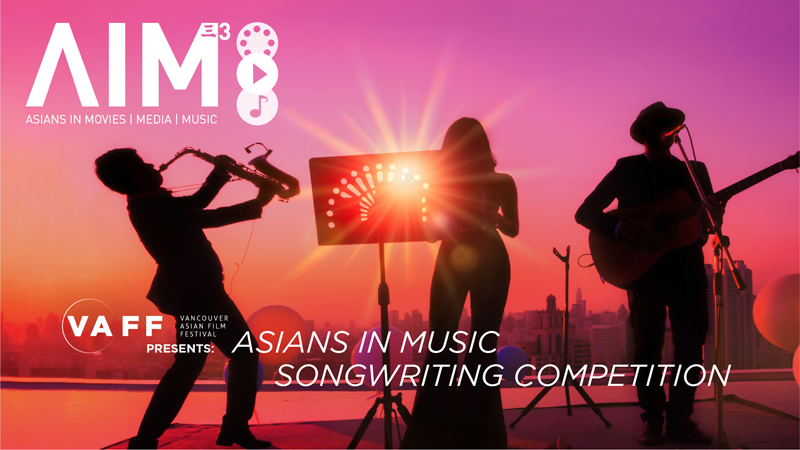 Regina recently sat down with Barbara Lee, Founder/President of VAFF, AIM3 to tell us more about 2019’s Asians in Music Songwriting Competition. Barb Lee at her music studio

Barbara Lee is a writer and independent filmmaker in Vancouver. She has worked as a broadcast journalist/reporter and received the national Radio and Television News Directors’ Association (RTNDA) Award for Best Editorial in 1998. Her film In Between the Laughter was one of the National Film Board’s REELDIVERSITY 2004 winners which aired on CBC and PBS. Barbara continues to support North American Asian artists in mainstream media and is currently working on a music documentary about Asians in the music industry as well as finishing her horror screenplay.  She founded the Vancouver Asian Film Festival in 1995, which debuted in September 1997.

ASIANS IN MUSIC is an extension of the initiative that began at VAFF’s 2016 festival as part of our first ever “AIM3: Asians in Movies, Media and Music Summit”, continuing throughout 2017 and 2018 in the form of a competition for loglines, directors, and models to create a series of 12 movie posters featuring Asian leads. The result of this first phase was the AIM 2019 Calendar, which is now available for purchase on our website. The Asian in Music Songwriting Competition is the second phase this innovative program.

AIM3 – Asians in Movies, Music and Media was launched by VAFF in 2016 as part of VAFF’s 20th Anniversary celebrations.  VAFF identified that there needs to be more Asian representation in all the creative arts industries. The last two years VAFF focused on bringing attention to Asian Canadian/American writers and actors with the AIM Calendar.

This year VAFF will focus Asian Canadian/American musicians, singers and songwriters.  We feel that there has been a lack of Asian artists in popular music and AIM Music project hopes to change this by launching the Asians in Music Songwriting Competition.

Twelve original winning songs will be chosen to be part of the AIM Compilation Album that will be sent to Music Supervisors in Film and Television in hopes that these songs will be placed into movies and films. As people may not know music sync (film & tv placement) is one of the few remaining avenues for musical artists to get paid for their music. VAFF wants to help songwriters get their music heard and placed. Music was my first love and I have been writing songs since I picked up my first guitar at age 11.  I didn’t see any role models in music that looked like me in mainstream music and because of that I didn’t feel that it was possible for me to carve out a career in music. For the last 4 years I’ve been working on my own documentary called SING MY SONG about my personal journey in music and the search for the right Asian singer or singers to sing my songs.  I want to help those that were me considering a career in music and have them be hopeful and see others that look like them doing it.

I hope to provide a platform for other musical artists that struggled to find a path early in their music careers.  I want to provide opportunities and to showcase the depth and breadth of singers, songwriters, bands, etc. in North America that are of Asian heritage.  I want to see a bona fide Asian Canadian rockstar or rock band sell out concerts in stadiums and arenas around the world.

The music industry is changing so much right now and the old gatekeepers and the old rules are changing.  In the past, the record companies had a very tight grip on who became a recording star and who didn’t. Over the years, rock or popular music tapped into the psyche of the times and often spoke about things that were meaningful to the younger generation making music that the older generation often frowned upon.  Whether it was Elvis’ hips and lip curl, the Beatles long hair, Glam Rock makeup, Grunge’s alternative sound, Hip Hop & Rap’s anger about police brutality, etc. Young people found their voices and expressed their thoughts, angst, struggles, etc. through popular music and they shared these feelings through mainstream music.  However, because the Asian community was shut out from the music industry, we as a community have been left out of being able to find our voices to express our thoughts, struggles, angst, etc and share this with the larger community. This needs to change. I’m happy to see the rise of K-pop and bands like BTS growing in popularity and winning American music awards.  I want these groups to have long careers. However, there does seem to be a minimizing of their music because members of these groups can be easily replaced, meaning their art or songs or persons are not an integral part of the band’s success.  This is because there is someone or something else creating the songs, look, dance moves, etc. for these groups. I think there is a definite place in the music spectrum for these musical groups, but I would also like to see an Asian singer/songwriter group  come from North America, that celebrates their Asian heritage, but at the same time have a place in mainstream music. For those rockstars like Bruno Mars who is part Asian, it seems like their musical abilities are considered to be more the non-Asian part of their background and often they are marketed as ethnically ambiguous.  I wonder how many Bruno Mars fans in the US or Canada actually know that he is half Filipino.

I would like to see an Asian Canadian/American rockstar make it in mainstream music and be supported by fans from all communities here and around the world, making music that my kids get to hear on the radio when I drive them to school.  Asian Adele, Asian Elton I would like the North American music industry to be truly colour blind, which of all the arts, it should be the most colour blind.

But the music industry is changing and the opportunities are out there.  Fans care about the music and the artist, so there is more hope now than every before that the Asian musicians in North America can find their voices and be part of the mainstream music industry.

8. What is your expectation or influence of this project?

I want Asian singers, songwriters and bands to dig out their songs that they feel had no home and AIM will give them a home and hopefully help kick off a dream career in music.

That’s Virtual Coffee Talk. I’m Regina. Contact us at media@vaff.org to spread awareness of different diverse media, both foreign and domestic, and to promote filmmakers.