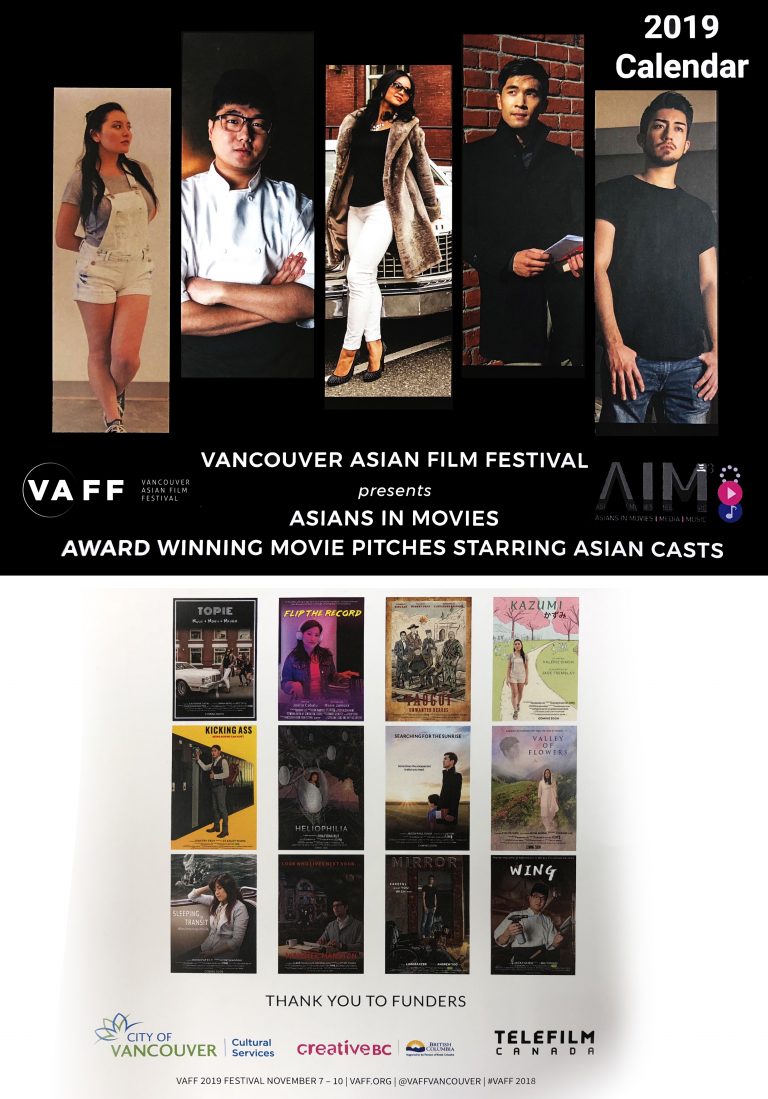 For over two decades VAFF has been a strong advocate for increasing Asian representation in front and behind the camera in mainstream media.  However, with the increasing trend of Caucasian actors being cast in place of Asian characters and the outcry against this erasure of Asian representation in media, VAFF feels compelled to do its part in continuing the advocacy work started by so many who care deeply about this issue. This AIM Project was begun in March of 2016 and concluded in October of 2018 with the production of this Asians in Movies Calendar.

VAFF fiercely supports campaigns such as #starringjohncho, #whitewashout and #oscarssowhite and we hope by hosting the “Asians in Movies” Summit in 2016 and Calendar Campaign Contests, we can facilitate real change in the film industry. Barbara Lee, founder of VAFF tells her story about the Asians in Movies Campaign. Read More.

Between 2016 and 2018, VAFF offered screenwriters an opportunity to promote their loglines and story ideas for a feature film to producers and other film industry professionals. 12 winning loglines were chosen to be produced into movie posters, and were included in the resulting twelve month calendar (the “Competition”).

No monetary or other type of prizes were offered besides inclusion into the VAFF AIM 2019 Calendar.

What is a Logline?

A logline is one or two sentences explaining what the story is and why it is compelling. The purpose of a logline is to provide a “teaser” or headline or a sales slogan for what your screenplay is about.  It should hook the reader into wanting to read your full story.

Thank you. Registration is now closed.

LOGLINE WINNERS (In No Particular Order)

1.VICTOR YOUNG
Young writer moves to the big city to pursue his dream and unwittingly rents a room in a mansion in which the tenants are legendary monsters.

2.  DESIREE LIM
VALLEY OF FLOWERS – A young woman goes to India to trace the journey of a friend who went missing after a tragic plane crash, and discovers that heaven has more in store for her than she could have ever imagined.

3. THUC DOAN NGUYEN:
TOPIE – a Vietnamese-American woman, pairs with her friend Alison as hapless indie record label owners. They meet their match when it comes to Chinese-American pop star wanna-be “CC Lux”. Somehow the three gals find a solution in the midst of a crime caper that works for all of them.

4. CYNTHIA MINH
SLEEPING IN TRANSIT – A young woman grapples with the fragmented memories of her late father—whose complicated life as a Vietnamese refugee subject shapes her increasingly porous sleeping and waking life.

5. JADE TREMBLAY
KAZUMI – A young woman with depression re-evaluates her life on the day her parents make a surprising announcement.

6. MILTON NG
WING – An immigrant struggles with cultural differences while aiming to master Chinese/Western dishes to become a chef.

7. MIA FIONA KUT
LAND OF NO NOCTURNE – In a small town where the sun has not risen in years, a headstrong young woman with a memory condition and and impossibly gifted 10 year old strike up a friendship, revealing truths about their sunless society.

8. MARIE JAMORA
FLIP THE RECORD – In this 1980s coming-of-age story set to pulsing hip-hop music, a Filipino-American teen discovers her identity through a budding talent for turntablism.

9. JAYHUN OH
SEARCHING FOR THE SUNRISE – An unhappily engaged Korean-Canadian pastor is suddenly changed when a young boy arrives at his door, and tells him he’s his son.

10.  ALEX SHIFMAN
YAOGUI – After six hapless Chinese railroad workers unleash a horde of monsters on a small western town, they must join up with the descendent of the Chumash shaman who put the monsters away in the first place and save a young country that doesn’t value their existence.

11. STANLEY WONG
KICK ASS – After being voted “most boring” by his high school peers, a quiet Asian guy in a predominantly white town vows to KICK ASS before the end of senior year.

12. ANDREW YOO
THE MIRROR – A loner alcoholic discovers a time portal that transports him back to the day he was paralyzed in a horrific car accident.