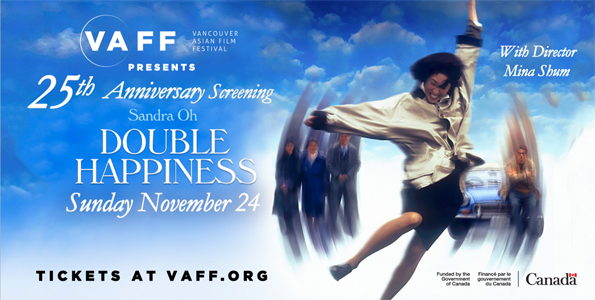 A Special Screening for the 25th Anniversary of Double Happiness

Vancouver, BC – November 18, 2019 – The Vancouver Asian Film Festival (VAFF) will hold a special screening of the iconic movie Double Happiness for the film’s 25th anniversary. The event will also feature a post-screening Q&A with the film’s writer and director, Mina Shum. The screening will take place on the 24th of November 2019, at 12:30 pm  at the Rio Theatre, 1660 E Broadway, Vancouver, BC.

A landmark film in the history of Asian representation in Canadian cinema, Double Happiness is celebrated as one of the few North American films of the 1990s to have a primarily Asian cast. Earning seven Genie Award nominations and two wins, Sandra Oh’s breakthrough performance in the film won her a Genie Award for Best Performance by an Actress in a Leading Role.

The film follows Jade Li, (Sandra Oh), a Chinese-Canadian born in Hong Kong and raised in Vancouver. She is struggling to live the life that she wants to while trying to keep up with Chinese traditions that her old-fashioned parents want to strictly maintain. Jade’s father works as a security guard who keeps following the penny stocks, while Jade’s mother desperately wants her daughter to find a nice Chinese boy to settle down with but Jade is not at all interested. When Jade meets a caucasian boy, she must decide what to follow and how much her happiness is truly worth.

VAFF has been a full supporter of diversity in film from the beginning and Double Happiness is a film that has embodied that. From an all-Asian cast, to Sandra Oh’s breakthrough role, the film itself is an influential piece of art.

Tickets to the screening can be purchased in advance for $12 online by visiting http://vaff.org/doublehappiness25/ and for $15 at the door.