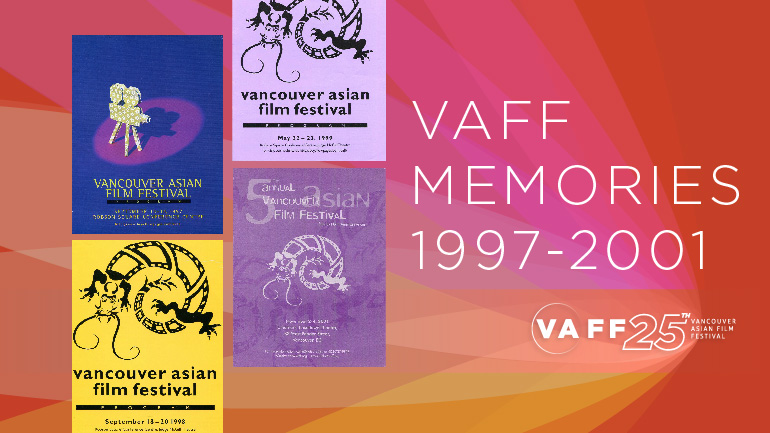 As we look forward to the 25th anniversary of VAFF this year, let’s take a trip down memory lane and recount key moments and milestones, starting with VAFF’s 1997 debut.

Here are a few fun facts about VAFF! VAFF’s debut featured 38 Asian-American films, and was hosted at the Judge McGill theater, now the University of British Columbia’s downtown campus. Taiwanese-American director Justin Lin, director of much of the Fast and Furious franchise as well as Star Trek Beyond, actually attended the first-ever VAFF! The second annual VAFF included funding from the Canada Council for the Arts. As a result, we were able to increase Canadian film content to twenty-five percent of all film screenings that year. VAFF also started to fund Canadian artists for showcasing their works. Garrett Wang, from TV’s Star Trek: Voyager was brought in to open the event. With the first two festivals taking place in September, VAFF was moved to May to coincide with Asian Heritage Month. Due to the shift, a smaller event was held featuring the best films from previous festivals. The team also made a conscious effort to present even more Canadian films and videos, establishing a mandate of at least fifty percent Canadian content. More than 700 people attended the film festival in 2000, taking place at the Cinemark Tinseltown Theatre, now the Cineplex Odeon International Village Cinemas, in Chinatown. Tickets were completely sold out days in advance, marking a festival chock-full of great cinema and a mass of rave reviews. One of the ways we fundraised for VAFF in 2001 was with the Gala of Wines, taking place at the now closed Urban Well downtown. Along with a fantastic selection of wines for tasting, past shorts were screened to increase anticipation for the festival later that year. Many guests took home door prizes from our esteemed partners and sponsors.

Author, Alexis Ocampo, Born in the Philippines, raised in Japan and Singapore, and having graduated from McGill University in Montreal, Alexis is now a Copywriter/Content Marketer with digital marketing agency BSTRO. She combines an international upbringing with a passion for social impact and storytelling.